History of the building

Discover the splendid ceiling with our virtual tour.

The following is taken from a reproduction of the work of leading historian of British architecture and a scholar of astonishing productivity, Sir Howard Colvin.

Elegant and strong in design, marvellously rich in craftsmanship, the Theatre has admirably served its purpose for over 350 years, and today still provides a dignified and superb setting for ceremonial occasions.

Located in Oxford’s medieval city centre, the Sheldonian Theatre is the principal assembly room of the University, and the regular meeting place of Congregation, the body which controls the University’s affairs. All public ceremonies of the University are performed here, notably the annual Encaenia.

"The University acquired the site soon after the Restoration, and in 1664 to 1669 the present theatre was erected. Gilbert Sheldon, Archbishop of Canterbury and a former Warden of All Souls, met the entire cost of the build and so gave his name to the building.

The architect was a young Christopher Wren, then Professor of Astronomy at Oxford, with as yet little practical experience of building. Inspired by drawings of Roman theatres, he adopted their D-shaped plan. However, the open arena of Rome, unsuited to the English climate, had to be covered.

To do this without introducing load-bearing columns into the central space, which would ruin the resemblance to an ancient theatre, Wren designed a roof truss able to span the required 70 feet, a technical achievement which gained him great credit in scientific and architectural circles and made the roof of the Sheldonian a landmark in roof construction.

From below, this technical ingenuity was, however, concealed from view by the painted ceiling. The painter of the ceiling, Robert Streater, adapted his ambitious baroque composition to Wren’s conception of the building as a Roman theatre open to the sky. The Roman theatres were protected from the sun and rain by a large awning supported by a network of cords. In the Sheldonian these cords are lavishly gilded and in high relief. From them, putti roll back a vast crimson awning, revealing the triumph of the Arts and Sciences over Envy, Rapine and ‘brutish scoffing Ignorance’.

In planning the interior, Wren made another deviation from his Roman original. There is no stage against the flat southern wall, and the focus of attention is the Chancellor’s chair in the middle of the semicircular end. Thus the functions of the auditorium and stage are reversed and, however Roman the plan may be, it has been freely adapted for academic purposes by an architect who never allowed his deference to classical prototypes to degenerate into pedantry.

The two elaborately carved and gilded boxes which face each other across the auditorium were intended to be occupied on ceremonial occasions by the two proctors of the University (these are no longer used). On the front of the boxes, the ‘fasces’, or bundles of rods bound round an axe, protrude from lions’ heads. These were Roman symbols of authority, here representing that of the proctors.

It is probable that Wren intended his treatment of the flat façade facing the Divinity School, with columns on the lower storey and pilasters on the storey above, to be carried on round the polygonal exterior of the building, but this proved to be beyond Archbishop Sheldon’s purse and classical display had to be restricted to the southern wall."

Reproduced with kind permission of the author, Sir Howard Colvin, from The Sheldonian Theatre and the Divinity School (1974)

Restoration work continues to take place. To find out more about the conservation projects taking place at the Sheldonian take a look at our detailed timeline. 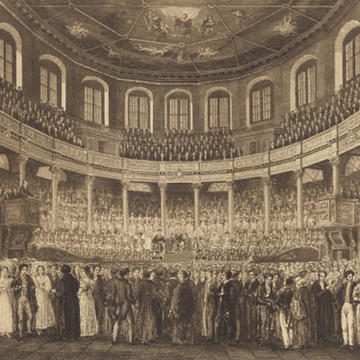 Historical sketching of inside the theatre 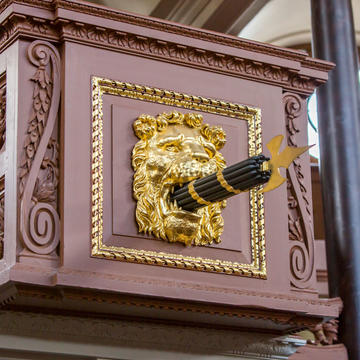