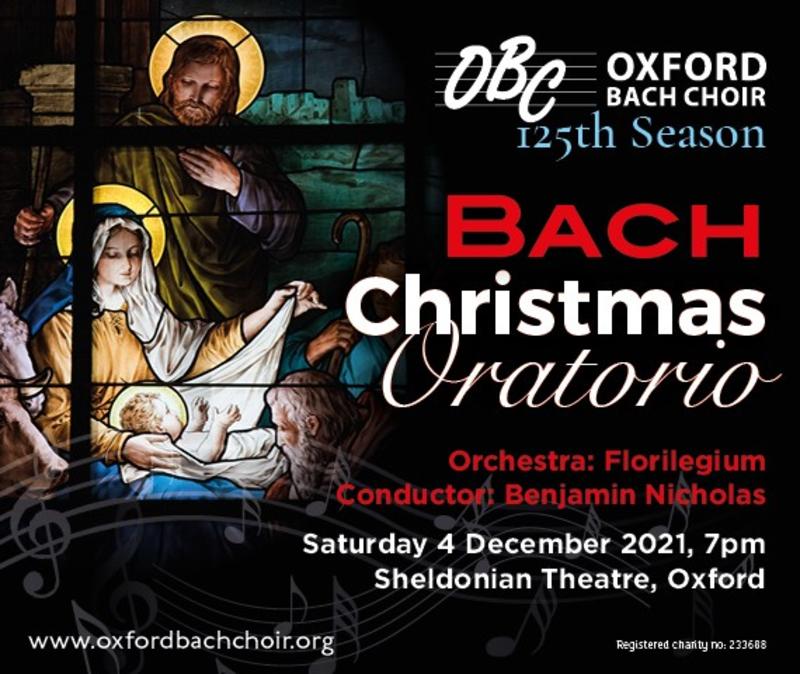 The 125th Anniversary Concert of the Oxford Bach Choir is a rare performance of all six parts of Bach’s joyous Christmas Oratorio.

This is the Oxford Bach Choir’s first live concert since the start of the pandemic, and they are joined by four world class soloists, Aoife Miskelly, Helen Charlston, Nick Pritchard and Peter Harvey, and the outstanding period instrument orchestra Florilegium. Benjamin Nicholas is the conductor.  The choir is performing all six parts of the Christmas Oratorio, in the original German, and at original pitch.
Most exciting for the choir, the performance will be almost exactly to the day, 125 years earlier, that the Oxford Bach Choir gave its first ever concert.  On 7th December 1896, in the Church of St Mary Magdalen, the choir, under its first conductor, Basil Harwood, performed Bach's Christmas Oratorio.

You are warmly invited to this special anniversary concert as the Oxford Bach Choir performs one of its patron composer’s most popular seasonal works!

Concessions for under 18s and full-time Students. 10% discount on full price for group bookings of 10+

Doors open at 18:00 ready for a 18:30 start. Latecomers permitted at the end of part 1. Approximately 3 hours' running time.

Unfortunately, children under 6 will not be admitted.